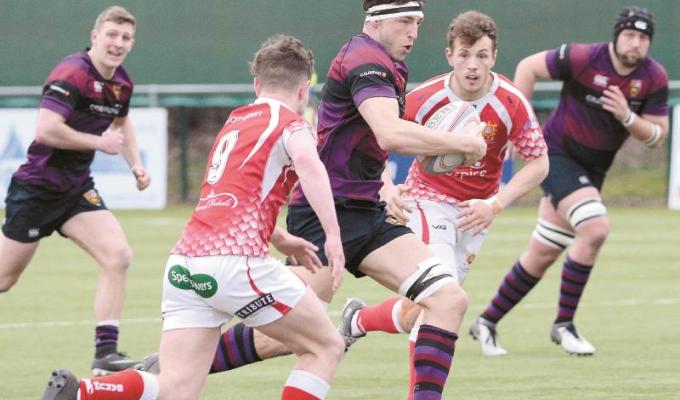 It’s not yet known for sure when rugby will resume across the UK, but whenever that dates rolls around, Maidenhead RFC will be competing in a new league.

For the first time in their history, Maids are set to compete in the London & South East Premier Division, after they complete a sideways switch from the South West Premier. And the consensus among the players and officials is that the positives far outweigh the negatives.

Maids have known this might be on the cards for some time, having been consulted on the matter by the RFU after Bracknell and Newbury dropped out of the South West Premier. The movement of clubs up and down into the division also meant that, in terms of geography, it was difficult to continue accommodating Maids in the South West leagues.

“We’ve been close to doing it before. But with Bracknell and Newbury going down and the movement up and down into the South West Leagues, it’s left the South West Premier with one too many sides.

“It comes down to mileage and we’re the furthest club from the south west. But It will cut our mileage down from something like 4,000miles a year to 1,200 miles. There will be some financial benefits in terms of travel, as some of our new games will be 20 minutes away, such as Chiswick, which is very nice.

“The biggest difference will be time. Normally every other weekend we’d be spending seven hours on average on the road. The change will have massive implications in term of player availability, as when we go to the west country a lot of our players are teachers and coach in the mornings so they can’t travel with us. For recruitment purposes, although this is yet to be proved, it should be easier as players will have a one hour trip to away games rather than a four-hour trip.”

Aside from the practical and logistical benefits there is also the excitement of locking horns with new clubs and players, in a league that will challenge the players and coaching team in different ways.

“We love the South West league and have been in those leagues ever since I was a player,” said Bough. “We love playing down there, they’re a great bunch of people.

“But we’re looking forward to the new challenges. It will be a slightly different style of rugby to the one we’re used to. The consensus from some of the boys is that the quality will be higher, the matches will be quicker and faster. Maybe the conditions will be slightly better which will make a difference to the quality of the pitches.

“It’s a style of play we enjoy, it’s a new challenge and we’re looking at a new three-year plan.”

Maids have been edging closer and closer to promotion from the South West Premier, under Russell Bolton and then David Mobbs-Smith, however, while it might be more difficult for them to immediately challenge for promotion again in the London Premier, Bough said they’ll be looking to do more than simply consolidate next season.

“Our objective when we returned to the South West Premier three seasons ago was ‘let’s stay here and try to improve every year’. And that’s what’s happened. Mobbs (David Mobbs-Smith, head coach) now has a new three-year contract rather than a yearly rolling contract. It allows us time to get where we want to get to without forcing it.

“We often look to the Rams. They took a lot of time to get out of this league and move to the next one and I think we’ve been trying to do it a little too quickly. We’ve been putting ourselves under too much pressure. If it takes us longer to get out of this new league but we’re better prepared to go up then that’s a good step forward.

“We will need to find our feet, but I don’t think we’ll be going into this league with a view of consolidating. We want to win every game and get promotion as soon as possible, but we’re going about that in a more measured way. The boys are very excited about it. They’ll play new clubs, new players, meet new styles of rugby. I think our longest trip is North Walsham which is only two hours away. There will also be more travelling fans coming to Maidenhead which will be good financially.

“We’ll go into this league feeling confident and it will be exciting. It’s all very positive. We’ve known about this for some time as we were consulted on the matter by the RFU, who wanted to know what our response to moving across would be. The coaching team and the players were all up for a new challenge.”