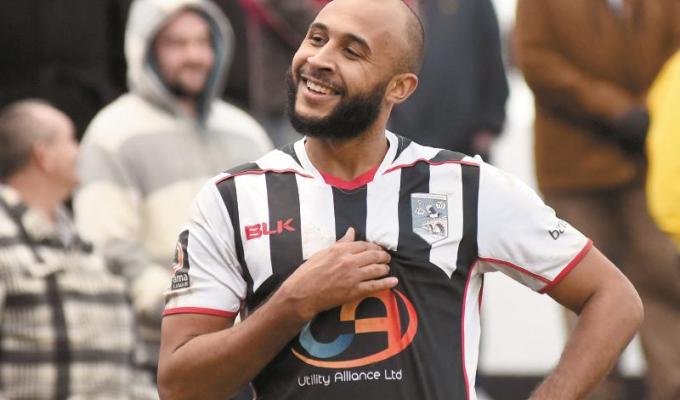 Maidenhead United fans’ frowns were turned upside down on Saturday as Havant and Waterlooville’s loss to Solihull Moors secured the Magpies National League status with three games to go.

The visitors slipped to a 3-0 defeat against promotion-chasing Salford but the coach trip back was not all doom and gloom as news filtered through of Havant’s defeat, meaning the circa 400-mile round trip ended with celebration.

“We saw Havant had dropped points on the coach back,” said Maidenhead midfielder James Comley.

“We always knew it would be a tall order for Havant to win four games after we put ourselves in a good position.

“So, the next three games aren’t a jolly up but we know we can play with freedom and free of pressure.”

Despite the celebrations, Comley was disappointed with the way in which Maidenhead played too much of a part in their own defeat, despite starting the brighter of the two sides.

“It was disappointing,” added Comley. “We started the game really well and it was pretty even.

“I would even say we were on top. We created the chances but we just didn’t put them away. I think we gave the game to them a bit really. We were a bit sloppy.

“We gave them confidence to play with a few silly mistakes.”

Those mistakes have been few and far between for the Magpies over the last five months, after digging deep and producing top quality performances to ensure safety was always in their own hands.

Comley highlighted Maidenhead’s form after Christmas as the catalyst for their National League table climbing.

“I think around Christmas and the turn of the New Year really,” added Comley.

“We picked up a lot of points and we’ve been a lot more solid really.

“We haven’t given too much away and we switched to a three- man midfield which made us harder to beat. We brought in Alfie (Kilgour) and he was pivotal for us and since then we carried on staying solid.”

The midfielder has enjoyed a fine season for the Magpies, making 35 league appearances as well as providing four assists, but stressed that the focus is firmly on finishing the season on a high.

“I would say there isn’t a focus on the points as much now.

“We are safe but we want to finish as high as possible,” said Comley. “I’m a winner and I want to win every game.”