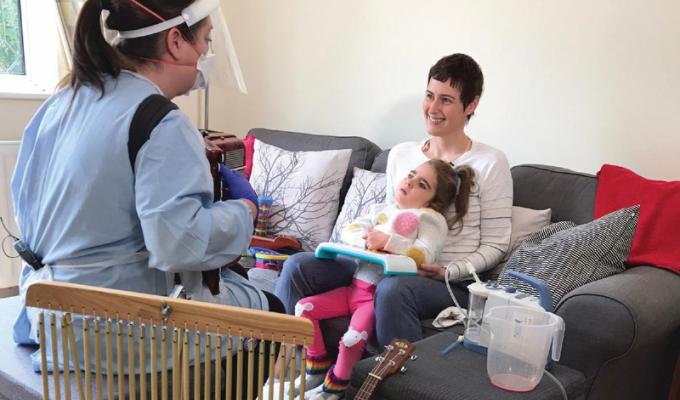 A young girl supported by Alexander Devine Children’s Hospice Service will feature in a BBC Lifeline Appeal on Sunday.

A young girl supported by Alexander Devine Children’s Hospice Service will feature in a BBC Lifeline Appeal on Sunday.

The BBC regularly broadcasts 10-minute appeals for individual UK-based charities and the latest good cause to feature is Jessie’s Fund.

The national charity has supported music therapy at Alexander Devine for the past three years, and six-year-old Jessica Newell is one child who has benefitted.

Jessica has Leigh’s syndrome, a life-limiting neurological disorder that affects her mental and movement abilities.

The programme, featuring Jessica and several other children, will provide an opportunity to see how powerful music can be for children who have complex needs.

She added: “For children like Jessica, music therapy gives an opportunity to be creative and be heard when verbal language is not always possible.

“It is a space where she can take her time to communicate, choose instruments and vocalise how she is feeling.”

The sessions have taught Jessica’s mum, Vicky Holliday, how to communicate with her daughter and hear what she needs.

Vicky said: “Jessica loves music and having music therapy gives her an opportunity to express herself. Alexander Devine’s music therapist, Anouska, provides her with choices of what instruments to play and she is able to get involved in turn taking and directing the tempo and rhythm of the music.”

The BBC Lifeline Appeal will be aired at 2.05pm on Sunday on BBC One, at 2.30pm on Tuesday, October on BBC Two and then avialble on BBC iPlayer.