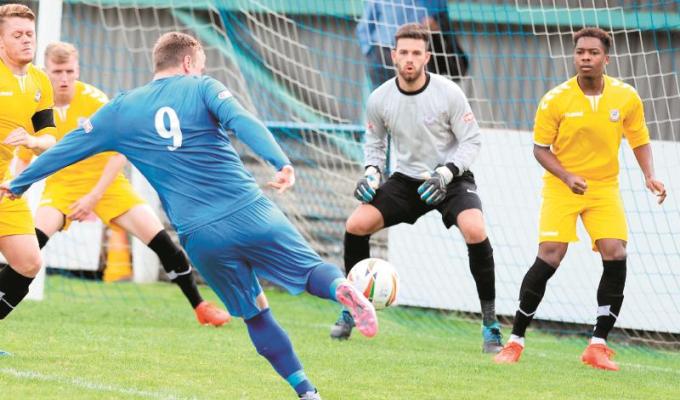 Marlow FC did not let off field issues affect them as they produced a professional performance to beat FC Romania 2-0 away from home on Saturday.

The Blues kept the pressure on second place Bracknell and all but secured their play-off berth with the comfortable win, despite missing first choice goalkeeper Simon Grant.

It was a tale of two penalties in Saturday’s encounter as Kameron English opened the scoring from the spot in the first half before Marcus Mealing notched his 20th goal of the season with a thunderous penalty in the second half.

“I think we are probably still a bit away from where we want to be in terms of performance levels,” said Marlow manager Mark Bartley.

“But what we discussed before the game was the most important thing at this stage was that we got the three points because it puts us on the verge of cementing our play-off position.”

Marlow’s off-field issues continue, with the club appealing against the Berks and Bucks decision to remove them from the county cup final following an appeal from Slough Town on the eligibility of two Marlow players, but with the season drawing to a close, Bartley praised his side’s ability to go out on the pitch and get the job done.

“My side are resilient,” added Bartley.

“We are pretty good at leaving things at the door, getting out there and doing things out on the pitch and then picking things up afterwards. It’s been a great show of strength from the boys.

“The boys have put the off-field things behind them but naturally they are disappointed with where we are in that situation. But they, just like me are hoping common sense prevails hopefully.”

The Blues face another busy weekend, playing twice in the space of 48 hours as they take on South Park on Saturday before travelling to Northwood on Easter Monday and Bartley is expecting a tough task for his side.

“South Park are in a fight for their lives and they need points to make sure they stay in step four,” said Bartley

“So that means there’s something on the game. I’m expecting a fight because they need points.”