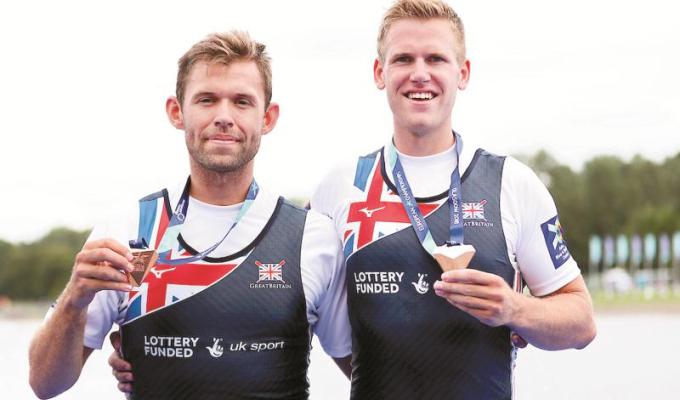 There have been mixed results so far on the Sea Forest Waterway for Great Britain’s rowers at the Tokyo Olympics, but most crews are still on course to reach the finals of their respective events.

The crew of Beaumont, Harry Leask, Angus Groom and Tom Barras had to qualify for the final through the repechage ‘second chance’ race.

They went into that race as favourites and duly delivered, establishing a strong rhythm to take the lead by the 500m mark and then stayed ahead of the dogfight between Estonia and China behind them for second.

“You have to be in it to win it,” said Beaumont. “And now we’re in it. We turned up today with a job to do and we did that. “I’m really proud of how we attacked the race and took it by the scruff of the neck.”

Barras called it a ‘really good stepping stone’ from the heat and one which gives the crew confidence ahead of this week’s final. They’d finished third behind the Netherlands and Australia in their heat.

The men’s four crew – featuring Windsor’s Ollie Cook and Marlow’s Rory Gibbs – booked their spot in the A final on the second day of competition in Tokyo.

GB have won gold in the men’s four at every Olympic Games since 2000 and the team of Cook, Gibbs, Matthew Rossiter and Sholto Carnegie showed they’re capable of taking a sixth straight title by beating Italy in their heat with a time of 5minutes55seconds, just over a second slower than Australia’s time in the heats.

They’ve finished third at the past two World Championships and will fancy their chances of a medal in the final, scheduled for 2.10am UK time on Wednesday.

“In terms of performance, we’ve rowed better,” said Cook. “It was a bit washy, my steering wasn’t great. We can go a fair bit faster, which is exciting.”

Helen Glover’s return to Olympic rowing after three years out didn’t go exactly to plan, but she and partner Polly Swan still qualified for the semi-final of the women’s pair.

Cookham’s Glover was selected for the GB squad after taking time away from the sport to start a family with husband Steve Backshall and is the British rower to have been selected for an Olympics after having children.

In their heat the European champions finished behind Australia and the Russian crew, while world champions New Zealand dominated the following heat. Their performance was though good enough to grab a semi-final spot. Glover was sent a video by son, Logan, on his third birthday ahead of her first race.

“He sent a video message last night saying he was proud of me,” said the double Olympic champion. “When I think about what they all mean to me, especially on his birthday. Everything I do on the water is for them.

“Part of wanting to do this was to bring them along for the journey and now they’re starting to see the fruits of the ergos in the living room, the watt bike in the utility room and lifting weights between making their dinner. Now it makes sense a little bit. Putting in that work with them alongside me has been key.”

The final, should they make it, is scheduled for 1.30am UK time on Thursday.

The women’s four, featuring Sunningdale’s Hattie Taylor, claimed one of two spots available for the final in Sunday’s repechage. Taylor, Rowan McKellar, Karen Bennett and Rebecca Shorten established a good early rhythm to get out early alongside Poland and withstood a frenetic sprint to the line from Poland and Romania to book their spot in the final.

Inclement weather in Tokyo saw Monday and Tuesday’s racing cancelled. The next races will take place on Wednesday morning. It is unclear if the scheduled final times stated above will be impacted by this.