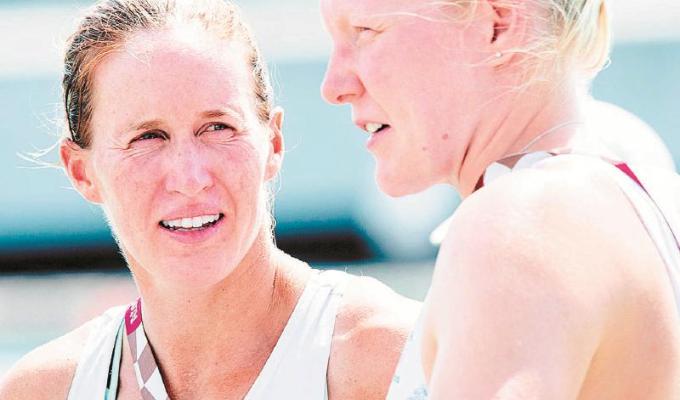 Cookham’s Helen Glover just failed to add to her Olympic medal collection as she and partner Polly Swann finished fourth in the women’s pair on the Sea Forest Waterway in Tokyo this morning (Thursday).

Cookham’s Helen Glover just failed to add to her Olympic medal collection as she and partner Polly Swann finished fourth in the women’s pair on the Sea Forest Waterway in Tokyo this morning (Thursday).

Mother-of-three Glover, 35, and Swann came through two tough qualification races just to make the start line in the final, but they couldn’t quite keep pace with their rivals as New Zealand took gold ahead of the Russian Olympic Committee who took silver and Canada who won bronze.

The double Olympic champion took four years out of the sport to start a family with her husband, the television presenter Steve Backshall, and is the first mother to make the British Olympic team.

She only considered making a comeback last March, when the Tokyo Games were postponed for 12 months because of the coronavirus pandemic.

Swann, an NHS doctor who is due to return to work next week, was also seeking to cap a stunning comeback after taking a break to focus on her medical career.

"For both of us, this has felt more like a journey than anything we've done. We even look to the route of getting to the start line and how many crews fall to the wayside," Glover told the BBC.

"You can never say that a place in the final isn't exciting.

"The last year for both of us is one we're going to look back on and I think when you're caught up in the moment of it and the day-to-day grind of only having one year, it feels so immediate.

Reflecting on the pair’s performance in the final, and the prospects of her continuing in the sport and competing at her fourth Olympic Games in Paris in three years’ time, Glover said: “I’m definitely making no plans to come back.

“I said the same after Rio, but four years out followed by a one-year comeback is probably about all I’ve got in me to be honest.”

The Cookham athlete added that her children, Logan, Kit and Bo, had been the inspiration behind her return to the sport and she hopes in turn she’s been able to inspire them and others.

“You can do anything you want to do,” she said. “Trying and failing is no problem as long as you try.

“That goes out, not only to my children, but everyone out there. Everyone who has supported me along the way I just want to say thank you for your messages.

“Success can look different to everybody. I London and in Rio I left with gold medals around my neck that I knew were mine for the taking.

“This time we came in not knowing what we could do in such a short space of time. But we managed to put together a final we could be proud of.

“Right now, It’s hard to look much past the finish line, but there have been many people who’ve been in touch and told me how much my comeback has inspired them, or it’s changed their thinking, or they can say to their children, look what’s possible.

“This time around it was always about the journey, and I know that sounds really cliché. But I never thought there would be this many people feeling so strongly about it.

“I’m so proud of what we’ve done, and I want to take this moment to thank people for their well wishes and support, embracing both of our stories.”