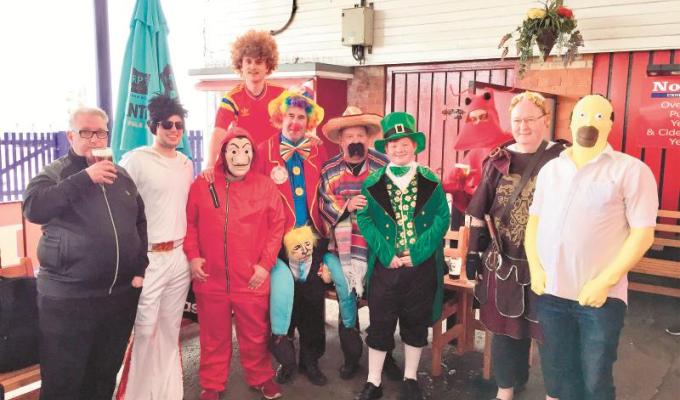 Maidenhead United's victory over Grimsby Town on Saturday was as good as it was unexpected, but - having taken a 3-0 lead against the Mariners' 10 men - manager Alan Devonshire wished it has been a little more comfortable.

Maidenhead United's victory over Grimsby Town on Saturday was as good as it was unexpected, but - having taken a 3-0 lead against the Mariners' 10 men - manager Alan Devonshire wished it has been a little more comfortable.

United travelled to Blundell Park looking to stretch their recent unbeaten league run to seven matches, but few of the fancy-dress wearing supporters who followed them north would have been expecting them to do that against an in-form Grimsby team chasing promotion.

A leprechaun, a lobster, Julius Caesar, Elvis Presley, Carlos Valderrama and Homer Simpson - to name but a few -were among those who got dressed up for the trip, however, given the club's penchant for upsets this season, maybe this result shouldn't have been such a surprise.

United hadn't really threatened before taking the lead midway through the first half when Luke Waterfall inadvertently diverted a cross past his own keeper Max Crocombe who'd come out of goal to collect the ball.

Waterfall's afternoon would soon get worse when he was sent off conceding a penalty from which Sam Barratt made it 2-0. A third followed from Ryan Upward in the second half to all but seal the result, however, the 10 men never gave up and managed a late consolation through Tristan Abrahams' 75th minute penalty.

Devonshire told Grace Scott afterwards: “It’s a great result for us, they’re going for the play-offs. We went 1-0 up against the run of play maybe, but Dan (Gyollai) hasn’t had a lot to do really.

“They then went down to 10 men and rightly so, he was the last man. We scored the penalty, and I was hoping it would be a bit more comfortable than it was but they’re a good side so. We got the three points and move on.

“That’s seven games undefeated now, we’ve done ok in those seven games, and we move on to Notts County next Sunday.”

He added: “We’ll be in training as normal; they’d like to think they have the week off now, but they haven’t, we’ll be in on Monday, and we’ll go from there.

“Let's now finish the season on a high.”

After training this week the Magpies return for their final game of the season at home to Notts County on Sunday, another side pushing for promotion through the play-offs.