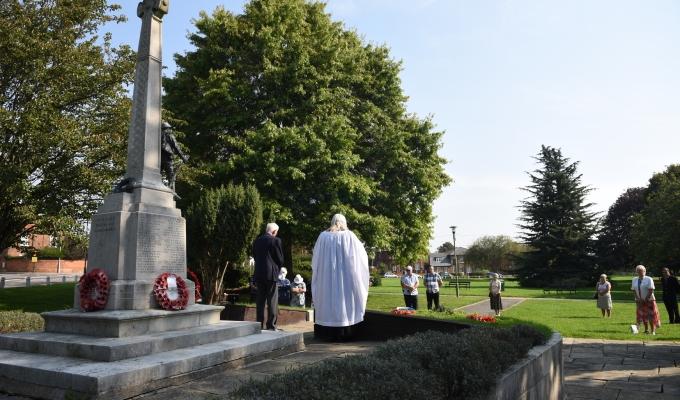 The heroes who protected the nation during the Battle of Britain 80 years ago were remembered in Burnham today (Tuesday).

The heroes who protected the nation during the Battle of Britain 80 years ago were remembered in Burnham today (Tuesday).

Socially-distant well-wishers observed a two-minute silence at Burnham War Memorial, in Burnham Park, to mark Battle of Britain Day and pay tribute to the men and women who gave everything to preserve the freedom of the nation.

Maidenhead and the surrounding areas have a close association with the pivotal battle. Wing Commander James Nicholson, who trained at White Waltham airfield, was awarded the Victoria Cross for his bravery in combat above the English Channel.

The Air Transport Auxillary (ATA), based at White Waltham, was pivotal to the Allies’ success in the battle, delivering aircraft to the frontlines so pilots whose planes had been shot down or damaged could get back in the air.

Speaking to the Advertiser, Richard Poad, chairman of the Maidenhead Heritage Centre, said: “The ATA’s involvement was simple, to take airplanes to the front line squadrons so they could fly into battle.

“Quite often the reaction from the pilots was ‘thank god for that, you’ve brought us something flyable.’”

“If you talked to the people on the ground, the engineers that were on the airfield, they would say we weren’t heroes, the pilots were heroes.

“The pilots that flew into battle, with the odds they were up against, it's just mind-blowing, but they were supported by a fantastic ground team who were so determined, they were all part of the team.”

Following the battle, the members of the ATA were praised for their crucial efforts in what turned out to be a pivotal moment of the Second World War.

Lord Beaverbrook, who was Churchill’s minister of aircraft production, lead the praise. After the battle, he said: “The ATA sustained and supported the Royal Air Force in battle.

“They were soldiers fighting in the struggle just as completely as if they had been engaged on the battlefront.”